Find Your Career Path in College 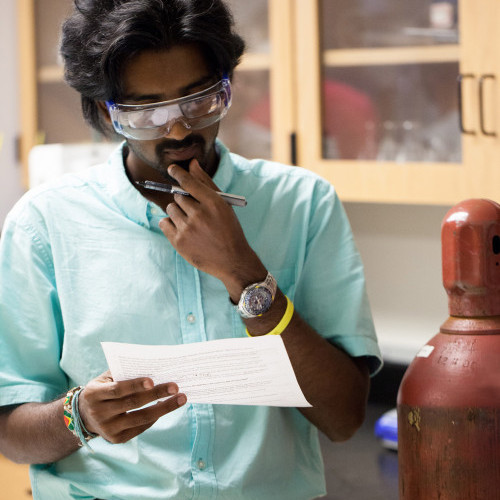 Some students know exactly what they want to do with their lives after high school. They enter college with a clear idea of which courses to take and what they want to do when they graduate. Many people, however, struggle with this decision. When Randy Persaud graduated from Monroe Area High School, he had no clear idea of what he wanted to do for a living. He knew he wanted to go to college and had taken AP (Advanced Placement) classes while in high school. So, when his mother enrolled at Athens Technical College, he followed her. He enrolled in classes that sounded interesting and soon discovered he had a passion for science.

He enrolled in classes that sounded interesting and soon discovered he had a passion for science.

Athens Technical College offers an Associates of Science in Biotechnology, which interested Persaud. Under the guidance of Dr. Jeff Rapp and Dr. Brent Beall, he earned his degree in 2014. He knew he wanted to obtain a higher degree in science but was not sure which direction to take. He was particularly interested in chemistry and began considering schools which offered degrees that matched his goals. He looked at several colleges in his area and found that some would accept only part of his college credits for transfer. Eventually, he found Piedmont College, which accepted all his earned college credit for transfer.

Eventually, he found Piedmont College, which accepted all his earned college credit for transfer.

While at Piedmont College, Persaud worked closely with his initial academic adviser, Dr. Steve Nimmo, who helped him plan his course work. In two years he graduated with a bachelor’s degree in Chemistry. Persaud describes his time at Piedmont as “…a wonderful two years of my life.” While he was earning his degree at Piedmont, he discovered a program offered through the National Science Foundation called Research Experiences for Undergraduates (REU), which offers students the opportunity to take part in active research projects funded by the National Science Foundation. He entered the program and spent a summer at the University of Alabama working under Dr. Carolyn J. Cassady. Persaud enjoyed the research experience and decided to continue his education in science.

He is currently enrolled at the University of Alabama, where he is working towards a Ph.D. in chemistry under the guidance of Dr. David A. Dixon. His advice to high school students is to take dual enrollment courses to experience some of the responsibilities of college while in high school. He also has some advice for people who may have earned some college credit but who are not sure about the next steps. “You have to do the research. You have to ask when you want to transfer. You never know what you’ll find.”

“You have to do the research. You have to ask when you want to transfer. You never know what you’ll find.”